When it comes to combating climate change, neither governments nor businesses can do it alone. To have any chance of limiting global warming to 1.5 degrees C (2.7 degrees F), we need bold climate action from both business leaders and governments, each of which can push the other forward toward a more prosperous, zero-carbon economy.

Every action businesses take to address climate change can add confidence for governments and spur them to enact stronger policies to help businesses achieve their climate goals faster. In turn, new ambitious targets and legislation to slash emissions gives companies greater clarity and confidence to invest in a zero-carbon future. Combining these efforts creates an ambition loop.

Corporations are already creating the ingredients for ambition loops by pursuing science-based emissions reduction targets, committing to 100 percent renewable energy, boosting energy efficiency, committing to end deforestation and making the transition to zero-carbon vehicles. At the same time, nearly all countries have put forward initial national climate plans, though they must be further strengthened by 2020. Countries that provide businesses with the ultimate clarity they need to invest in climate solutions will, in turn, drive faster progress on their sustainable development and growth objectives.

This positive feedback loop of accelerating and reinforcing government policies and private sector leadership is already helping to take climate action to the next level in many places. The Ambition Loop, a new report by United Nations Global Compact, We Mean Business and World Resources Institute, showcases specific examples where strong national policy measures built upon business leadership are spurring additional investments and climate action. Where policies are clear and strong, businesses are stepping up to do more and the pace of change is accelerating. These examples can inform policy-makers’ efforts to achieve their economic development and emissions reduction goals faster.

The best way to understand ambition loops is to see them in action.

In 2014, India set a bold target to develop 100 gigawatts of solar capacity by 2022. In support of that goal, the State of Karnataka set its own target to develop 2 GW of additional solar generation by 2021. However, certain charges on solar generation meant that solar power prices varied widely, making it less competitive and less attractive to businesses than electricity made from fossil fuels.

The Green Power Market Development Group, a coalition of Indian and international companies working to purchase renewable electricity, asked regulators to provide clarity on the timeline of charge exemptions for solar projects in Karnataka. Long-term assurances would, they argued, allow solar projects to attract investment and get off the ground at competitive prices. 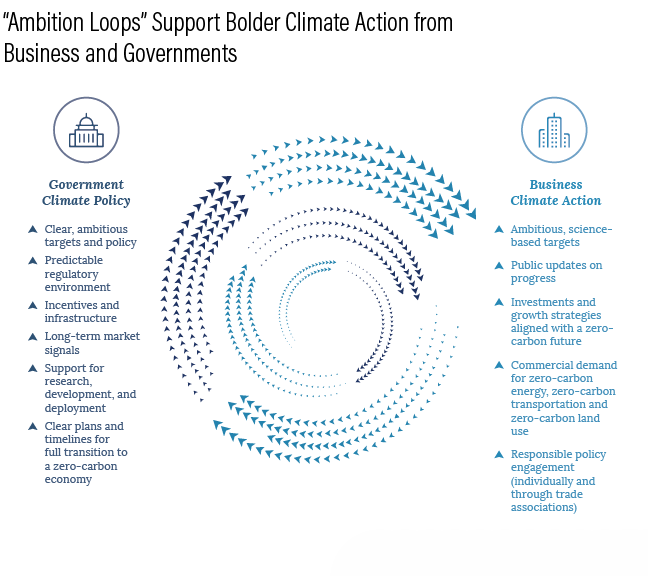 Once businesses had clarity and confidence about price levels they would face, corporate solar purchases grew quickly in Karnataka, jumping from zero megawatts of additional solar capacity to over 1,000 in the following four years. This made Karnataka the state with the most open-access solar energy projects in India. 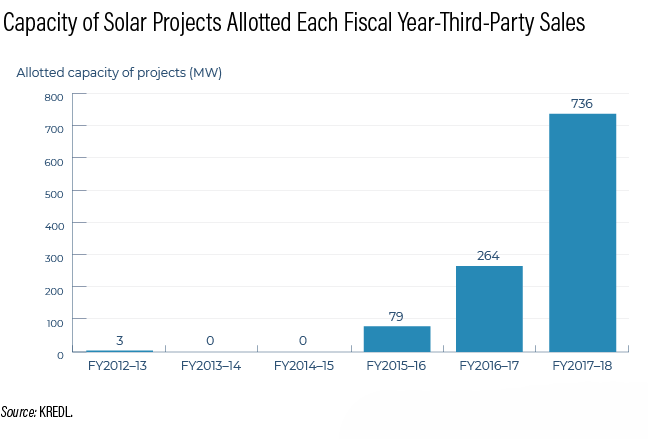 Bolstered by the support from business, in mid-2018 the European Union increased its 2030 renewable energy target to 32 percent from the previous proposal of 27 percent and issued a clause requiring its member states to remove administrative barriers to corporate power purchase agreements. This strengthened target and accompanying policy will in turn help to accelerate corporate access to markets for renewable electricity, completing one full circle in the ambition loop and springing into a newly reinforcing cycle of scaled up business investment to support further strengthening of government policy.

These are just a few examples of climate efforts spiraling upward as businesses and governments feed off one another to step up their efforts. The Ambition Loop report highlights other compelling case studies, including how:

Clarity and confidence give ambition loops momentum. Government policies that add clarity and build confidence are critical to driving action across the private sector and providing the right incentives to move all companies toward a zero-carbon future.

Government leaders can use the examples in The Ambition Loop paper to inform their domestic climate policies, strengthen their national climate commitments and develop long-term climate strategies — all of which are critical to guide private sector investment. We have every incentive to outpace the most damaging consequences of climate change and take advantage of the $26 trillion opportunity that bold climate action can offer through to 2030. It has never been more important to harness the power of ambition loops.